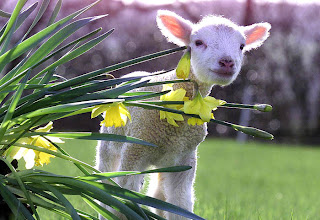 Palm Sunday:
On the Sunday before Passover, Jesus came out of the wilderness on the eastern side of the Mount of Olives (just as the prophecy said the Messiah would come).
People spread cloaks and branches on the road before him. Then the disciples "began, joyfully, to praise God in loud voices for all the miracles they had seen" (Luke 19:37). The crowd began shouting, "Hosanna" a slogan of the ultra-nationalistic Zealots, which meant, Please save us! Give us freedom! We're sick of these Romans!"
The Palm Branches:
The people also waved palm branches, a symbol that had once been placed on Jewish coins when the Jewish nation was free. Thus the palm branches were not a symbol of peace and love, as Christians usually assume; they were a symbol of Jewish nationalism, an expression of the people's desire for political freedom.
Jesus as the Passover Lamb:
Jesus came to the people as the Lamb of God. On that lamb selection day, Jesus didn't enter the temple by the southern gate to worship, he didn't enter by the eastern gate as King, but he entered by the northern gate as THE lamb who takes away the sins of the world - Jesus, the sinless Messiah who would die on humankind's behalf, appeared on the very day that people chose their spotless Passover lambs! (Choosing a lamb was somewhat like we pick out our Christmas trees...it as a tradition to go out and "pick your lamb")
It's almost as if God said to the world,
"Here's my Lamb. Will you chose him?"
But instead of turning to Jesus as the Lamb of God, the crowds misunderstood his proclamation that he was the Messiah. They wanted him to be their political-military deliverer.
Jesus Wept:
In response, Jesus wept. The tears Jesus shed as the people cried out their political "Hosannas" were tears of grief for the hearts of his people.
Jesus foresaw the terrible devastation of Jerusalem that would result because the people did not recognize him as God's Messiah. The people were looking for a messiah who offered political deliverance and a political kingdom.
However they would have nothing to do with the Messiah who offered forgiveness and deliverance from sin. In his grief over their distorted beliefs, Jesus wept out loud.
This Palm Sunday He listens for your answer...
as He once again asks....
Will you pick Me...Let Me be your Lamb?... 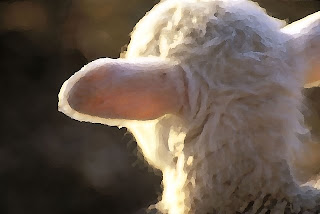 Grace and Peace,
DCC
Posted by Debbi's Blog at 7:59 AM

I am in so grateful for this sight.. I feel safe and fortunate to be able to pray and find peace at the same time.
Jewdith

Jewdith- you are safe and more than welcome here-

I am grateful for this site, too, and for the many ministries of AHUMC. Your church -- my church too -- has been a tremendous blessing to my mother, Virginia McDaniel. I heard your children's sermon last week, Debby, and I thought it was so good. A teacher in Arkansas, I was there for spring break with my wife, Kathy. Keep up the good work and the welcoming spirit.