"The napkin that was upon his head, not lying with the linen clothes, but apart,
having been folded up, in one place." ~John 2-:7 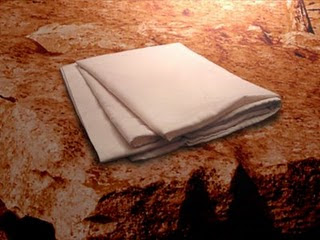 The Bible takes an entire verse to tell us that a napkin was set apart and folded.
Things that make you go hmmmm....

Did Jesus have good manners?
He was a nice tomb-guest?
His mother raised him well?

I am guessing yes to all of the above.

However, in Israel, I learned a few things of the Eastern culture...
not nearly enough..but a few things that have really enlightened The Scriptures for me
-one of them was about table manners back in the day.

The Hebrew tradition of that day about napkins, went like this:

When the master had finished eating, he would get up from the table,
wipe off and would then wad up his napkin and throw it onto the table.
The servant knew it was time to start cleaning-
because a wadded up napkin clearly stated,
"I am done. I am not coming back."

However, if the master got up from the table and folded his napkin and laid it next to his plate.....well, then we have a whole different story!

Because the folded napkin meant,
"I'm not finished yet...I will be back."

"Since I am going and preparing a place for you,
I will return to take you with me; so that where I am, you may be also." ~John 14:3

Jesus folded His napkin for a very specific reason-
He is not finished.
He will be back!

Thank You God, for the empty tomb and all that You are still saying to us through it.

I love this!!! Thank you Jesus.

WOW! I'm sitting here with Hudson Josiah on my lap; can't wait to teach him this!!! Thanks for the great lessons!

Very cool I am so grateful for your insights!!
JS