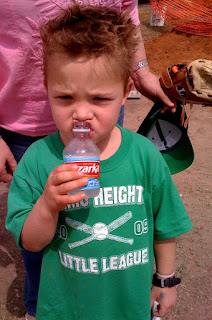 Okay....so the first game is over.
Now, according to "sweaty bones Jones with the Mohawk" here, he made two home runs.
According to me, who watched the game, I beg to differ....I'm just sayin' 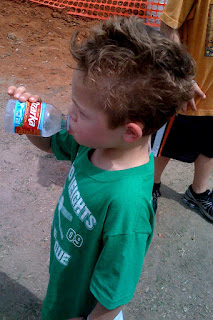 The after-game conversation went a little something like this-
Mikey: Um, Duhhbbbi, did you know there was a guy in the Bible...and he was little...like me
D: Yeah?
Mikey: His name was Zaccheennnuussstthh. He was little so he climbed a tree-to see Jesus.
D: Then what?
Mikey: Jesus saw him in it and said-was up? Come on Down.
D: Really? Come on down?
Mikey: Yeah....Come on down....and then they ate and hung out.
D: Cool Mike, what if He saw you in a tree? 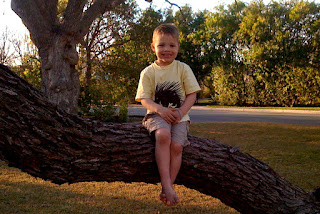 Mikey: He'd tell me to come down too- we might play T-Ball. 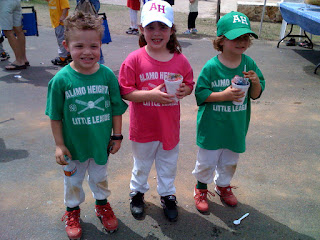 When Jesus reached the spot, He looked up and said to him, “Zacchaeus, come down immediately. I must stay at your house today.” So he came down at once and welcomed him gladly. (Luke 19:5-6) (Luke 18:18-30), He sought Jesus out. Unfortunately, the crowds prevented Zacchaeus from getting close to Jesus. Zacchaeus was “short in stature” - which likely has a double meaning. Not only was he physically short ("a wee little man”), but socially he was looked down upon as a despised tax collector, an agent of Rome, a “sinner”.
How awesome that Zacchaeus didn’t let the people prevent him from at least catching a glimpse of Jesus. He took the risk of making an even bigger fool of himself as he hiked up his robe, stretched out his hands and feet and climbed the sycamore tree ("to see what he could see”).
This is where God’s grace arrives in the person of Jesus. Though it seemed Jesus was just passing through, he suddenly stops in his tracks, looks directly up at Zacchaeus and calls him by name and tells him to come down ("for I’m going to your house today”).
Zacchaeus is so fired up that he “comes down at once and welcomes Him gladly.” (Luke 19:6)
He is so grateful for The Grace of God, in Jesus that he makes a public pledge to give half of his goods to the poor and return 400% to anyone he has cheated.
The story of Zacchaeus is a lesson in divine math.
~~~~~~~~~~~~~~~~~~~~~~~~~~~~~~~~~~~~~~~~~~~~~~~~~~~
Thank you Jesus for knowing our names...for finding us in the "trees" of our lives...and bringing us into Your Very Presence. 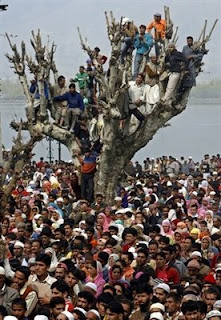 Grace and Peace,
DCC
Posted by Debbi's Blog at 9:47 AM