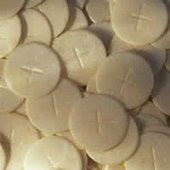 Police said they arrested a Connecticut man after he tried to steal communion wafers during a church service. 33-year-old John Samuel Ricci, of Canton, was cornered by fellow churchgoers when he grabbed a handful of wafers from the priest during communion services Saturday.
Ricci was being held down by seven offended parishioners when deputies arrived at St. Martin de Porres Catholic Church.
Ricci was charged with two counts of simple battery, theft and disruption of a religious assembly. He was being held Tuesday on $2,000 bond.
Let me begin by saying, I was not there.
However...REALLY?? You had to tackle him...with 7 people?
I have a novel idea for them, in case somebody tries to take too much of "Jesus' Body" again-
How about....give it to him!! Maybe see how you can help?? Oh wait, here is a really wild idea- pray with him. Or, maybe BE like Jesus....instead of "hogging" the bread.
I realize this sounds judgemental-but I take this as a reminder to myself-
There is plenty of Jesus to go around!!! I wonder where am I "hogging" Him? What am I showing others about Who He is?
God, thank you for always acting out of love, please teach me to do the same.
Grace and Peace,
DCC
Posted by Debbi's Blog at 8:38 AM