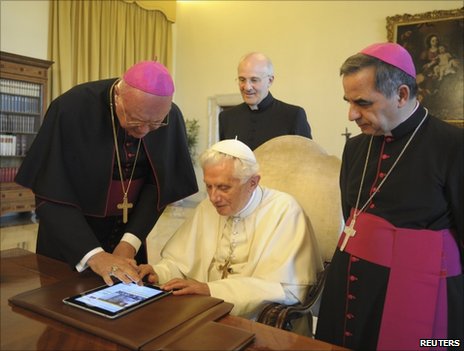 Something about The Pope tweeting, let alone from an iPad, makes me happy- for 2 reasons.
One reason: He is adorable.
Even more importantly, as my favorite teacher, Ray VanderLaan has taught me to ask,
how can we change our culture, if we don't know the language?

Jesus was not afraid to use secular pictures to teach God's truth. In His day, He saw images from the theater and ancient politics as an avenue for him to reach people who would not understand "religious" language.
The "church" communicating in a way that "the world" communicates?
I believe gives Jesus something to smile about.

We know that Jesus understood Hellenistic culture.
We know He knew the daily experiences and concerns of people who lived in a pagan world.
We know He used word pictures and stories that people would easily understand.

Jesus frequently used the word "hypocrite," a word describing actors. In one case, he encouraged people to avoid praying and fasting like "actors", who put on an exaggerated face and performed for the audience's applause.

“When you pray, you are not to be like the hypocrites; for they love to stand and pray in the synagogues and on the street corners so that they may be seen by men. Truly I say to you, they have their reward in full." ~Matthew 6:5

Whenever you fast, do not put on a gloomy face as the hypocrites do, for they neglect their appearance so that they will be noticed by men when they are fasting." ~Matthew 6:16

Jesus used, spoke and taught about and with the language of His Culture.
Which leads me to think, He just might very well be Tweeting, Blogging and Facebooking His Father's Message today.
Being that He is not physically here, it might very well just be up to us.

Pope Benedict XVI tweeting from an iPad, "Dear Friends, Praised be our Lord Jesus Christ! With my prayers and blessings, Benedictus XVI."
is a great example of how to change the culture by speaking it's language.

God, Thank You for the many opportunities You give us to show You to the world.

I can think of no better combo.