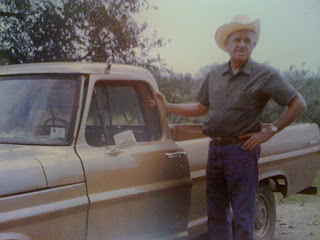 Popo was my grandfather.
We were glued at the hip. 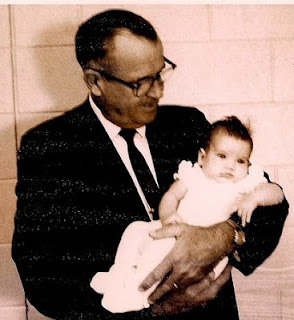 As Momo used to say, "never saw anything quite like you two together."

He's been gone over 10 years and I still miss him at times like it's only been 10 minutes.

He married Momo when my Uncle Con and Mom were toddlers.
And then God said- let there be Cherry! (Out of this union, I got an Aunt, a Godmother and a second mom. You know,the kind that never says no- and thinks your biggest mistake might very well be someone else's fault. I love her to pieces!)

Anyway-
I went to a Bday party this weekend for someone on Popo's side of the family.
I got to introduce myself as Frank Blair's Granddaughter, to those who I hadn't seen in 44+ years.
It felt so safe and familiar. 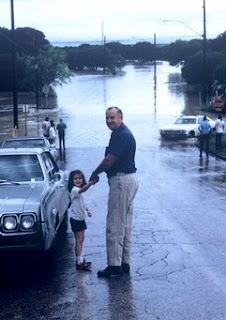 I suddenly became very aware of my actions- my language and who influenced who I am today.

As my eyes perused the room, I definitely saw bits of him everywhere and in everyone.
There was a slow drawl...talk of hunting and fishing...keen sense of humor and sharp old school manners...serious attention paid to what was cooking on the grill.

When I had a small group laughing, I wondered, did they see him in me?
Did they know, he is who sharpened my wit?

On my way home- I remembered that in every action and every word of his every day....
Jesus was constantly showing Who He was from.
He was constantly praying that they would see His Father in Him.

So, while I hoped they'd seen Popo in me- my greater hope is that they saw Jesus.

Are they seeing Jesus in me?

Are they hearing God in me?

"Let your conversation be always full of grace, seasoned with salt, so that you may know how to answer everyone." ~Colossians 4:6

God, Thank You for the grace that covers me, as I try and show Who You are.

everyone can see the faith and love of the Lord glowing in you like a beautiful candle,,,,,,,,,,,,,and not just at this time of year, but all the time...Hope you know how very much our Popo adored you!