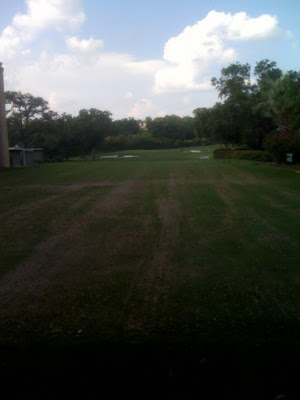 So, I have just returned from my daily walk on the golf course- 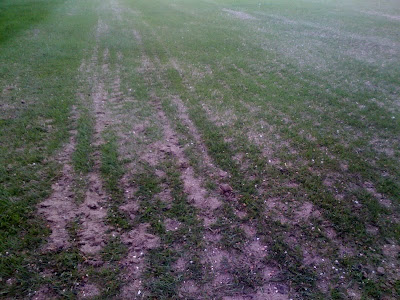 which was a barrel of monkeys at about 200 degrees and the humidity of 400%.
However, to add to the fun...the course was being aerated today. 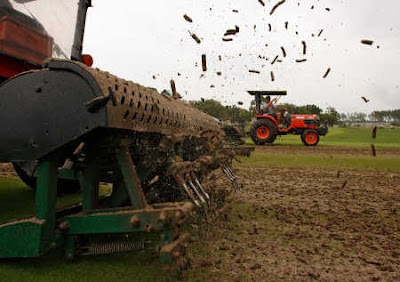 What is that? I'm glad you asked...it is the process of punching holes into the ground to allow water, oxygen, fertilizers, and (other stuff I didn't pay enough attention in science class to be able to repeat) to penetrate the soil and better reach the roots of your grass.
It's fascinating, I know.
The Smell was what got my attention.
Fertilizer along with some kind of ammonia (that could have wiped out Fort Sam Houston if the breeze turned), was flying through the air trying to kill me.
There I was, minding my own business, trying to shed off Teka Molina from lunch...and the air was so horrendous and strong that people were walking around with a snarl on their face...looking at each other...as if to say..."was that you?"
Seeing that it was 400 degrees....it could have been anyone.
Why am I blogging about this? Glad you asked...this reminded me of a lesson taught to me by Ray VanderLaan when I was in Israel in Jerusalem's Hinnom Valley.
The Hinnom Valley was at the end of a sewer channel. These commonly ran under the streets of ancient cities. Though the channels were probably used to drain rainwater from the towns, people also used them to dump human waste, garbage, and debris.
Trash and carcasses of unclean animals were continually burning in these valleys.
By Jesus' time, the Hinnom Valley (Ge-Hinnom in Hebrew) was know by its Greek translation, Gehenna, and it became the Hebrew picture of hell. Gehenna is mentioned in The Torah as well as The Qran.

As ancient Israelites emptied their garbage and sewer into the Hinnom Valley each day, they were given a vivid image of hell and an important reminder of the price for disobeying God's commands. It became a figurative name for the site at the greatest possible distance from heaven.

Without getting into a theological discussion on hell...I simply want to point out- that they had a literal picture of what it was like to be separated from God.

OK, so here is the part where I weave the SACC golf course to the Hinnom Valley in Jerusalem.

They had a "picture",that invigorated all their senses, as to what separation from what God might be like.

Today my senses were shocked, into remembering this place...and therefore my heart was reminded, that messing with disobedience is serious and dangerous stuff.

When God tells me to stay away from someone or something- He means business. If He has to aerate my heart, He will.

God, Thank You for protecting me from people and situations that You do not want me involved with.