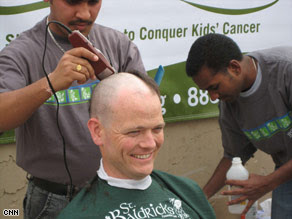 BAGHDAD, Iraq (CNN) -- Under a huge tent just outside the medical unit at Camp Liberty, shielded from the blazing sun, soldiers watch and cheer as two men at a time get their heads shaved. Clumps of hair fall to the hot sand below.

Maj. Stephen Roberts, a pediatric oncologist, set up a St. Baldrick's cancer fundraiser on his new base in Iraq.

But they're not just fighting the Iraqi heat. They're showing solidarity with sick kids they don't even know.
It started with a dare on St. Patrick's Day 2000, when two guys shaved their heads to support children with cancer. Thus was born the St. Baldrick's Foundation. In eight years, the awareness and fundraising organization says, events have taken place in 18 countries and the United States, "raising over $34 million and shaving more than 46,000 heads."
Maj. Stephen Roberts knows a lot about bald heads. He's a pediatric oncologist at Walter Reed Army Medical Center in Washington.
The kids he guides through treatment don't seem fazed by it. "They're just amazing, inspiring kids," Roberts said. "They're going through something more difficult than most of us can imagine and they do it with a level of grace and strength that I don't think I could match." 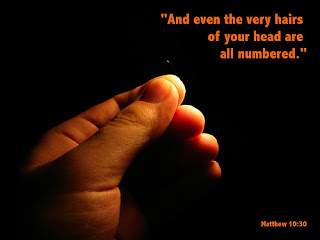 Christ in action-
Remember this coming Monday is Memorial Day...another opportunity for all of us to stop and say thank you. Don't miss your chance.
Grace and Peace,
DCC
Posted by Debbi's Blog at 6:30 AM