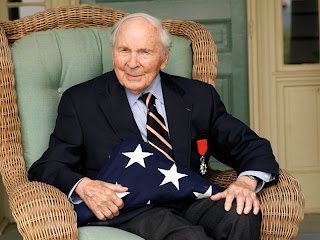 Frank Woodruff Buckles our last surviving WW I veteran
He was just 15 years old when he joined the U.S. Army. Soon, he was deployed to war and headed overseas on the Carpathia -- the same ship used in the rescue mission of the Titanic.
He was taken as a prisoner of war for 39 months in Manila, eating his meals out of a single tin cup. More than 60 years later, he still clings to that cup, the one that sustained his life. Weathered with age, the cup has flecks of white paint chipped off. He keeps it as a reminder of his sacrifice for the country he so loves. He also still has his dog tags.
At age 107, there's not much he has not seen. But this week, this quietly accomplished man was humbled.
Buckles met the president of the United States and received a standing ovation at the Pentagon.
He spoke from a wheelchair, dressed in a dark blazer with his military medals pinned over his heart. Those in attendance clung to his words.
"We cherish the chance to say thank you in person to Cpl. Frank Buckles," Defense Secretary Robert Gates said, before unveiling a portrait of him.
At the White House, President Bush thanked him for his "love for America" and called him "the last living 'doughboy' from World War I." 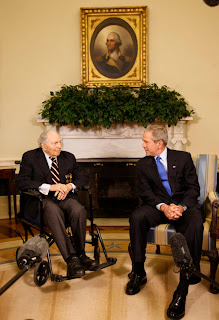 "Mr. Buckles has a vivid recollection of historic times, and one way for me to honor the service of those who wear the uniform in the past and those who wear it today is to herald you, sir, and to thank you very much for your patriotism and your love for America," the President said, seated with Buckles in the Oval Office.

John was said to be the longest-living disciple of Jesus..
Can you imagine what it would have been like to get him one on one and just listen...many did.
More than that...can you imagine sitting with Jesus Himself??
To thank Him in person??
You don't have to imagine...you can do it.
Right now.
Right where you are.
He deserves it.