The Last Supper, A New Command....

Jesus shared the final meal with His disciples, on the night before he was crucified. We refer to this as The Last Supper, and it was actually a Seder meal.

When we see paintings or think about The Last Supper, we often see Jesus surrounded by His disciples at a large table, sitting in regular upright chairs.
Those paintings are more than likely, very inaccurate. 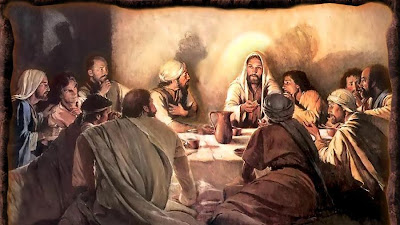 While studying in Israel, I learned that The Last Supper would not have included upright chairs.
Jesus and His disciples “reclined” to eat.
Huh?

They laid down, on their left side to dine.

Special "couches" were placed around a table in a horseshoe, leaving one side open for servants to bring and clear away food. In some cases, a piece of leather was merely rolled out on the floor as the table and people would lie down around it. The host reclined at the head of the table, and guests were arranged according to their esteem. The closer one was placed to the host, the more greatness and honor given.
Why am I telling you about tables and seating arrangement?
Because I want you to notice who Jesus has on each side of Him.
John and Judas.
Did you catch that?
His beloved John, (probably the youngest Apostle) and Judas....as in Judas who would kiss and betray Him within hours.
Jesus knew what Judas was going to do....He shared an intimate final meal, literally right next to him and STILL....went to the cross for him...as well as for you and for me.

"But God demonstrated his own love for us in this:
While we were still sinners, Christ died for us." -Romans 5:8 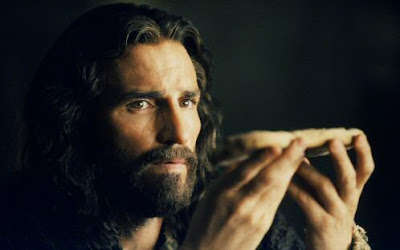 "While they were eating, Jesus took bread, gave thanks and broke it, and gave it to his disciples, saying, 'Take and eat; this is my body.'"

Then he took the cup, gave thanks and offered it to them, saying, 'Drink from it, all of you. This is my blood of the covenant, which is poured out for many for the forgiveness of sins. I tell you, I will not drink of this fruit of the vine from now on until that day when I drink it anew with you in my Father's kingdom.'"
~Matthew 26:26-29

Some call this Maundy Thursday.
The word "Maundy" means "a new mandate" in Latin.

And a new mandate, there certainly was- and still hold true today.
Jesus Himself, in his last hours with His Disciples said....
"A new command I give you; Love one another.
As I have I have loved you, so you must love one another." ~John 13:34

He was not asking or suggesting....He was commanding them and us...
Commanding!
Us.
You.
Me.
Scripture tells us that Jesus was crucified the very next morning, on a Friday.

God, thank You for your unconditional love. I can not believe what you went through for each of us, as if there were only one of us.