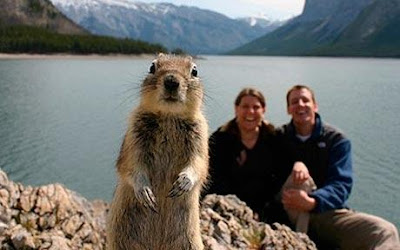 True Story-No Photoshop.
This couple had set the timer on their camera while posing at a lakeside in a national park in Canada.
Just as they were about to be captured on camera the cheeky squirrel popped up in the foreground and stole the show.
The picture was taken at the side of the stunning Lake Minnewanka in Banff National Park, Canada.
Mrs. Brandts said: "We had our camera set up on some rocks and were getting ready to take the picture when this curious little ground squirrel appeared, became intrigued with the sound of the focusing camera and popped right into our shot."
~~~~~~~~~~~~~~~~~~~~~~~~~~~~~~~~~~~~~~~~~
Ok...are you kidding me...how great is this?
What if God did that?
Popped up in all of our pictures.
Would it change the way I was acting or talking?
Yes and yes.
Guess what, whether we see Him or not...He is in it.
God, thank You for Your constant presence...for appearing where and when we least expect it.
In His Dust,
DCC
Posted by Debbi's Blog at 9:40 AM