Playing With The Big Boys... 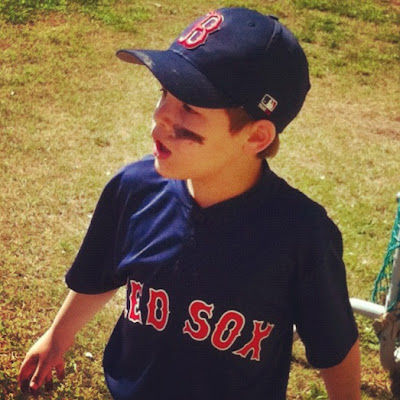 However, not by those of us who know him.
Big Mike is a "practice machine"
We have all watched countless hours of catching, throwing and batting.

on the "field", on Charles Road.
The field where he is boss.

All season long....He stepped up to the plate and marched out to the field or a base with a big smile and big swagger
Today, I was reminded that there was a reason he was drafted to play with the big boys.

basically, it was the last dance...
The last chance...
(sorry for your loss Summer Family.)
The opponent cracked the bat...
The ball went for a ride....high and deep....
over centerfield....
Who was out there??
The little guy who had waited all year long to catch "the one."
The Field General.
Big.
Mike.
D.

Guess what?
Practice pays off.

He not only made a superstar catch giving them one more out....
he fell catching it...jumped up and threw to 2nd for a double play.

Big Mike was instrumental in the Red Sox heading to the World Series.

He was carried off and lifted up by several teammates.
It was like watching Rudy's little cousin. You know, the one that played baseball instead of football and was at the Alamo Heights Little League fields instead of Notre Dame....
but other than that- just like Rudy.
Allegedly, there was a certain daddy, who was crying and jumping up and down in the dugout -Where no one could see him.

However, his little boy saw him and grinned...Mikey knew His Daddy believed in him, all along.
When the odds are stacked against us...when life feels hard and overwhelming...when grief surrounds us...when we are going from funeral to funeral...and reception to reception...when everything is just too much...when it feels like life has dropped us on a field with the "big boys" We can rest assured, we are not alone.
"What, then, shall we say in response to these things? If God is for us, who can be against us? In all these things we are more than conquerors through him who loved us. For I am convinced that neither death nor life, neither angels nor demons, neither the present nor the future, nor any powers, neither height nor depth, nor anything else in all creation, will be able to separate us from the love of God that is in Christ Jesus our Lord." ~Romans 8:31,37-39

God, Thank You are cheering us on and jumping with excitement from the dugout, sometimes to the point of tears.
In His Dust,