"We hold these truths to be self-evident, that all men are created equal, that they are endowed by their Creator with certain unalienable Rights, that among these are Life, Liberty and the pursuit of Happiness."
-Preamble to our Constitution
On July 4, 1776, they signed our Declaration of Independence. 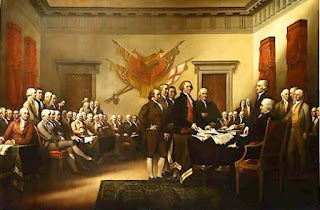 One year later, on July 4, 1777, Philadelphia celebrated the first anniversary in a way we might recognize-there was an official dinner for the Continental Congress, toasts, 13-gun salutes, speeches, prayers, music, parades, troop reviews, and fireworks. Ships were decked with red, white, and blue bunting.
Two years later, on July 4, 1778, General George Washington marked Independence Day with a double ration of rum for his soldiers and an artillery salute. This sounds like my kind of celebration!
232 Years later, on July 4, 2008- What will you do?
God, Bless the United States-and those who served to make it free-
Grace and Peace,
DCC
Posted by Debbi's Blog at 6:16 AM